A few years back, BMW made a very impressive entree in the field of electric vehicles with the i3 and i8 cars. Where the i3 was the more serious car, available as a pure EV and as EV with range extender (a petrol powerplant to generate power for the batteries) the i8 had to catch attention and make sure everyone was conviced BMW was serious about its new electric line-up (the i-series).

But it would really not be fair to reduce the i8 to the role of driving billboard. Because the i8 was and is an amazing car in its own right. It showed a conservative German carmaker still possessed the knowledge, will, and capability to create something truly revolutionary. And revolutionary, it was. Its amazing futuristic design with the ‘Lamborghini’-doors and the way wind is guided over (and through) the car is breathtaking.

And thats not where innovation stops. The interior is created from very new and unprecedented materials like special fabrics and renewable plastics. Instruments are fully digital and adaptive, years before Audi and Volkswagen introduced these into their mass production cars. And the engine also is a very special, of course. Its not a full EV like the i3, but basically a very innovative hybrid. It can drive 30 kms on electric power only, and then switches to a hybrid configuration. The petrol powerplant is a 3 cylinder turbocharged variant, sporting more than 200 horsepower. Using performance parts and clever sound engineering (both mechanical and speaker-wise) it sounds ánd performs like one of BMWs famous inline-sixes. But at an MPG-rate which would never be possible with a regular six cylinder engine. When power / sport mode is selected, the full potential of the hybrid drivetrain is released, causing true sportscar-like acceleration (4.4 seconds 0-100) and the instrument cluster changes to an orange theme. 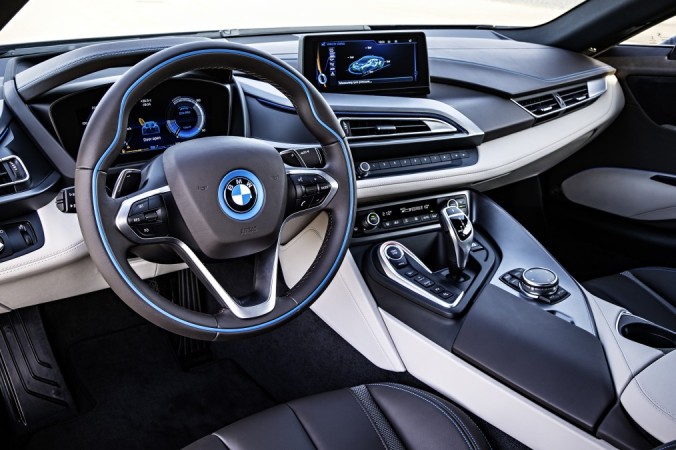 It’s a wish of the editor (in chief) of AutoExperience to once drive the i8 and experience it in real life. If you’re reading this and actually have the budget to acquire one; I’d advise in favor of it (starts around 130k). It’s an amazing car which will not look outdated or aging for years to come, and deserves its own special place between other sports and high performance cars.

…and yes, there is a Spyder on its way too!